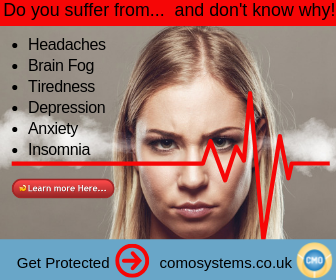 There are now thousands of scientific papers on the dangers of 5G, but no matter how much we appeal or complain, no matter the unsubstantiated rumours linking COVID-19 to 5G, the question of if in fact it’s the 5G towers oscillating at a rate that detaches Oxygen from our blood, leading to the breathing difficulties seen all over the Globe at the moment, the science is clear.

The technology is dangerous, it’s in the band of bio-weaponry and has been linked to infertility, diabetes, cancer and many many more issues.

Whilst I have been frantically attempting to research ways to protect my family, which as you all know started out with our Shield Hats for Christmas last year, every where I turned seemed to be cost prohibitive.

Finally, a veterinarian friend showed me the way, and now I have products on order, which I am confident will help.

Please do your own research, but if like me, you are on a low budget, at least take a look at the decade of science behind Comosystems.

I have an unsubstantiated theory on Cancer… I believe that it’s mis-named.

I believe that there are a number of pre-cursors that lead to cancer, that should technically split ‘cancer’ into separate categories:

i.e. ‘Cancer is a Fungus’ by Tullio Simoncin

That’s over and above the cancers caused by poisons and exposure to radiation.

Also see details of job of Lee Harvey Oswald & his Murderer Jack Ruby, where cancer was injected and proliferated by the use of X-rays…

So what’s the difference? All cancers form tumours due to mutated hyper-cellular regeneration. Conventionally Cancers are both identified and treated mostly according to location, with chemical therapies (Chemotherapy) aimed at the tumour in that location, in many cases the same chemotherapy, a derivative of ‘Mustard Gas’ is used. These ‘therapies’ target cellular apoptosis, in order to attempt to destroy the cells in the tumour.

Why do I think this is the wrong way round?

If non poison/radiation cancers are due to bacteria, fungi, viruses &/or parasites, destroying the cells that have formed around the invasive, will allow that invasive out of the protective layer of cells that the body has put down and allow it to proliferate into the rest of the body. Thus destroying the tumour, but proliferating the cancer the exact opposite of the patients objective. That would explain the 2-3% efficacy rate and the 98% recurrence rate in conventionally treated cancer patients.

I believe that the tumour is the bodies way of protecting itself and simply a symptom of the disease, and that the correct way to treat it, would be to find and treat the cause. Once the ‘invasive’ was killed, the body would no longer need to separate it off and in theory would naturally destroy the tumour itself.

Please note: I am not an Oncologist, nor am I a Medical Doctor, I have not Laboratory tested anything in relation to Cancer to substantiate this, it is just a Theory.