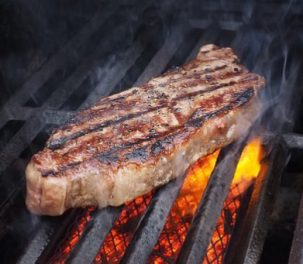 The quality of a proteins primary structure has an effect on its nutritional value and functionality upon gastrointestinal digestion (Yu et al. 2016) Cooking ‘denatures proteins, which destroys both the secondary and tertiary structures of proteins, disrupting the normal alpha-helix and beta sheets in a protein and uncoiling it into a random shape (Elmhurst University N.D.) it also effects colour (Suman & Joseph, 2013). Tenderness (Christensen et al. 2000) and gelation (Sun and Holley, 2011).

Cooking meat (to an internal temperature of 75 +/- 3 C) has an ACE inhibitory effect due to a higher thiol content (Simonetti et al, 2016) —ACE inhibitors reduce blood pressure and can lead to kidney failure, allergic reaction, pancreatitis, liver dysfunction, decreased white blood cells and angioedema. In fact cooked meat fed to animals has shown to contribute to pathogenesis of degenerative diseases including: 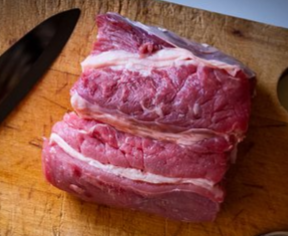 Interestingly whilst digestibility is lower in overcooked meat, it has a higher ‘protein’ level (Oberli et al, 2016), which would be listed on the proximate analysis of kibble and canned goods, however, the ageing and age related disease creating effects of cooked meats are increased when combined with sugars (found in the starches needed to form kibble and used as a filler).

The fresher the better

When death occurs and circulation ceases lactic acid is produced and pH lowers until glycolytic enzymes become denatured. Once the ATP used for these processes is gone rigor mortis sets in, degrading proteins (Yu et al. 2016), therefore the longer the meat has been dead, the more degraded the proteins, this means that your 21 day hung steak is tender, but has already been denatured by the degradation process. Carnivores in the wild eat quickly, possibly in order to consume the meat prior to it’s nutritional value being depleted.

1) Sarcoplasmic and myofibrillar proteins denature at 40 to 52.5°C

3) Partial of complete gelatinixation of collagen at 64-94°C

The effects on the three levels of structural integrity vary dependent on the way the proteins are cooked and the temperature reached, however in general proteins start to denature at 40°C/105.4F, amino acid levels are also negatively effected, as are enzymes efficiencies, Tryptophan, Tyrosine, Phenylalanine  etc. leading to incomplete digestion.

A massive increase in protein carbonyls occurs which modifies histadine, cysteine and lysine and is also known as oxidative stress, and ammonia release increases with temperature/cooking time.

Reading hundreds of papers on the effect of cooking on proteins, from milk to meat, the resultant denaturing, loss of nutrients and ageing effect, it’s not difficult to see how kibble and canned pet food, which is cooked at very high temperatures of long periods of time and potentially under pressure (extrusion process) which increases the loss of nutrients, is leading to our pets getting age related diseases younger and younger in life, and that it is negatively effecting lifespan.  The data is quite clear on that as over a 10 year period a 71% shift to kibble reduced the average age at which a dog is considered ‘geriatric’ from 8.85 to 7, and increased the average vet bill by 410%.

However, when you take into account that our simple processes of obtaining meat, and the delays that occur from death to plate also have an effect, it seems even more important that the food we provide our pets is as fresh and raw as possible for optimum nutrition.
This information is not new, in fact Francis M. Pottenger did his 10 year study on Cats  between 1932 and 1942, and that was raw compared to cooked to the same level that we humans cook our food (Pottenger, 1983). His study clearly showed that carnivores fed cooked diets were more susceptible to parasites, suffered chronic diseases, generationally increased deformities and infertility.  What the science does do is break the information down and prove Pottengers findings.

In conclusion, whilst cooking increases aroma & palatability for people, it is neither species appropriate or recommended for our pets, as it reduces protein quality, nutrient density & increases consumer ageing & age related diseases.

Simonetti A, Gambacorta E, Perna A. 2016. Antioxidative and antihypertensive activities of pig meat before and after cooking and in vitro gastrointestinal digestion: comparison between Italian autochthonous pig Suino Nero Lucano and a modern crossbred pig. Food Chem 212:590–5.